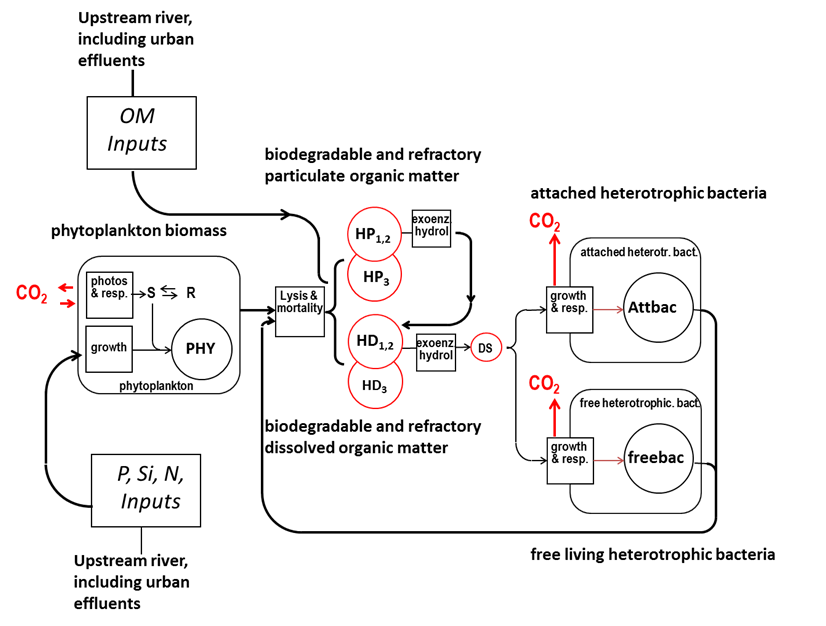 Figure:  Schematic description of the SENEQUE / RIVERSTRAHLER model (adapted from Garnier et al., 2008).
A schematic representation of the RIVE model of biogeochemical processes in aquatic systems. State variables include: DIA, diatoms; GRA, green algae; ZOO, zooplankton; BAC, heterotrophic bacteria; HD1,2,3, rapidly, slowly and non hydrolysable dissolved organic matter; HP1,2,3, rapidly, slowly and non hydrolysable particulate organic matter; OXY, oxygen; NH4,ammonium; NH4ads, ammonium adsorbed onto the sediment; NO3, nitrate;NIT, nitrifying bacteria; PO4, ortho-phosphate; PIP, particulate inorganic phosphorus; BIP, benthic inorganic phosphorus; Dsi, dissolvedsilica; BSi, biogenic detritic silica; BBSi, benthic biogenic silica;SS, suspended sediments; SED, deposited sediments. (From Thouvenot-Korppoo et al., 2009).
These include nutrient, oxygen, suspended matter, dissolved and particulate nonliving organic carbon concentrations, and algal, bacterial and zooplankton biomasses. Most of the processes that are important in the transformation, elimination and/or immobilization of nutrients during their transfer within the network of rivers and streams are explicitly calculated, including algal primary production, aerobic and anaerobic organic matter degradation by planktonic as well as benthic bacteria with coupled oxidant consumption and nutrient remineralisation, nitrification and denitrification, and phosphate reversible adsorption onto suspended matter and subsequent sedimentation.
The basic assumption behind the model is that basic biological and physico-chemical processes involved in the functioning of the river system are the same from headwaters to downstream sectors, while the hydrological and morphological constraints controlling their expression differ largely along an upstream–downstream gradient as do the constraints exerted by the inputs of terrigenous material.
The model describes the drainage network of the river system as a combination of basins, represented as a regular scheme of confluence of tributaries of increasing stream order, each characterized by mean morphologic properties, connected to branches, represented with a higher spatial resolution. The framework of the drainage network is built as a combination of three kinds of objects: (Fig)
- Upstream basins are idealized their complex drainage network structure as a regular scheme of confluence of tributaries of increasing stream-order, its having the same mean morphological characteristics.
- Branches are represented as major rivers, with a spatial resolution of 1 km of the detailed and realistic geographical.
- Reservoirs are represented as mixed reactors, connected either to branches at a defined position or to all stream-order rivers in a basin.

Figure  : The three kinds of objects taken into account in the representation of the drainage network by the Riverstrahler model: basins, branches and reservoirs (Ruelland et al., 2007).
The hydrological constraints, i.e. the flow of water within each object, are deduced from measured discharge data at a number of key stations in the river network and expressed in terms of surface runoff and base flow for each elementary sub-basins, based on the recursive filter of Eckardt (2005).The climatic constraints are set by the seasonal variations of temperature (by streamorder) and light intensity. The other constraints consist of point sources (the discharge of wastewater from human settlements) and diffuse sources (characterized by the concentration of each variable associated with the superficial and base flow components of the discharge issued from each and use classes of the watershed). The calculations of water quality in the drainage network are made at a ten days resolution.
The principles and data requirements of the Riverstrahler model are summarized in Figure.

Figure: Principles of the calculation of water quality by the Riverstrahler model (Ruelland et al., 2007).

The GIS interface SENEQUE, allows the user to run the Riverstrahler model for a definite project. It first allows the explicitdelimitation the part of the basin concerned, and the degree of resolution required in its representation in terms of objects (branches and basins) combination. It then allows the testing of defined scenarios through the fixing of anthropogenic and hydrological constraints. The GIS files used are under Arc/Info or ArcView format however all other files are simple text files, conferring a large versatility in the dialog with other programs or applications. The results of the calculations are provided as seasonal variations of discharge or concentration of any variable at one station (either at the outlet of the tributary of a specified stream-order for a basin, or at a specified kilometric position for a river branch) or as the longitudinal variations of discharge or concentration along a river branch at a specified time. A cartographic representation of the variable (with an adjustable color code) over all basins and branches of the project at a given time period can also be produced. Furthermore, the possibility exists to automatically compare the calculation results with measured data when these are stored in the database and the results from several scenarios of the same project can also be compared simultaneously (Figure).

Figure: Schematic representation of the functionalities of the GIS interface of the SENEQUE software

Figure : One of the working screens of the SENEQUE/Riverstrahler software: observation and modelling results of suspended solids of the Red River at the Hanoi gauging station
www.sisyphe.upmc.fr/piren/
Login to download
Sign up